Even in pre-historic times, the highlands of Tesimo had settlers in St. Hippolyt whose lives are reflected in historic findings. Tesimo was already mentioned during the Roman and Langobard times. 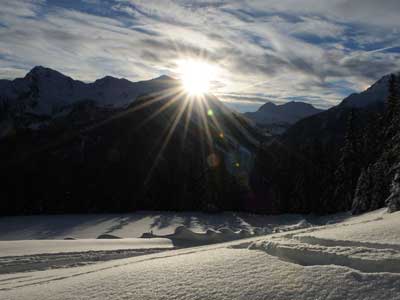 With a catchment area which extends into large parts of the middle Adige valley, the parish of Tesimo is one of the oldest and most important in the country.

The Parish church "Assumption of the Blessed Virgin" was first mentioned in 1194 when it was a Roman church. During the 16th Century it was restructured in Gothic style. The high altar was built in 1896. In 1986 the church was renovated. Artefacts worth seeing are the glass paintings from the Augsburg School (1520), the family crypts of the counts, the baptism stone with a wooden structure and the Heart of Jesus painting from 1796.

The Saint Michael's Chapel from the 15th Century with late Gothic frescoes, in the basement an "Ossarium".

The Saint Christopher Chapel at the Vorbichl was built during the 13th Century. Today, only the tower with its double arch windows is still visible. The rest was restructured in 1603.

The Saint Hippolyt Church was first mentioned around the year 1200 and was rebuilt during the 17th Century. The church holds the oldest bell in the parish of Tesimo, which originates from 1556.

The Saint Nikolaus Church in Caprile is from the 13th Century. It was restructured during the 16th Century. The outside walls portray remarkable frescoes.

The Saint Sebastian's Church of Plazzoles is from the 16th Century. Destroyed by fire and rebuilt in a Neo Roman style in 1898.