Hiking in the Dolomites and cycling tours along the cycle pathway in summer. Pusteria valley is often said to be clearly recognisable from the air by its features which give it the name "green valley". 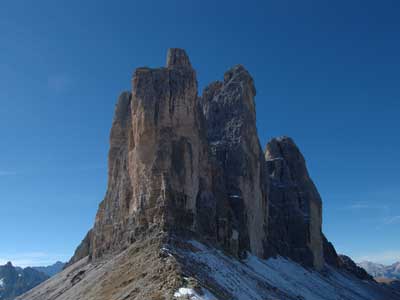 Situated on a four-hectare piece of open ground, visitors to the South Tyrol Museum of Ethnography in Dietenheim near Brunico can explore the old, original farmhouses, craft workshops and farm gardens representative of various South Tyrolean valleys.

The Tures castle in Campo Tures is impregnable and inaccessible surmounting a sheer rock, with battlements, a drawbridge, boiling oil chutes, an armoury and a grim, deep dungeon full of torture instruments.

Without frontiers, along the Drau cycle pathway. This supra-national bicycle path begins at the source of the river Drau and extends into Austria as far as the Slovenian border. Riders can decide for themselves the length of the tour.

The Nature park Vedrette di Ries-Aurina - Rieserferner-Ahrn is the second-largest nature park in South Tyrol, and is famed for its extraordinarily contrastive scenery and variety.

The Nature park Tre Cime - Drei Zinnen comprises the villages of Dobbiaco, Sesto and San Candido in the area of the Dolomiti di Sesto.

It is the marathon's legendary fame that brings athletes and mountain bike fans together in Alta Pusteria. The first Dolomiti Superbike took place in 1995 being one of the first mountain bike marathons in Europe, which is also one of the main reasons for its popularity and the increasing number of participants.

The Biathlon World Cup takes place in the biathlon centre in the Antholzer valley. Marvellous and thrilling races, enthusiastic fans, world-mastership-atmosphere and the biathlon village.

How to get to Pusteria valley

By train: take the IC or EC train to Fortezza - Franzensfeste, change for Brunico - Bruneck to your final destination.

By plane: flight to Innsbruck (Austria, 120 km) Verona Villafranca (200 km) or else Bolzano - Bozen (80 km). From the airport take the train to your final destination.